Extra Chilli is a Food & Travel genre based video slot game developed by Big Time Gaming. This slot deals with the Mexican culinary practices which lay a huge stress on use of different types of chilli peppers. If you like Mexican food then you can easily comprehend the need of the extra chilli. Everyone likes to spice up their lives and what can be better than making it more special by giving it a dose of some extra chilli by participating in this slot game.

Extra Chilli is six reels and 117649 MegawaysTM to win video slot game. The reels of this game can provide up to seven rows depending upon the size of symbols. This can happen when extra four symbol rows under second to fifth reels are taken into consideration. The most amazing thing about the game play of this slot is the independent movement of the rows. While the upper rows of symbols moves in cascading effect, the lower symbols moves from right hand side.

The graphics used in the Extra Chilli slot game are quite sharp and accompanied by a tune played by a mariachi band interspersed with celebratory exclamations and fireworks. The symbols used in this game are in the form of different types of chilli peppers made out of crystals along with other symbols from deck of cards. This slot is available on all types of devices ranging from desktops to mobile.

Extra Chilli slot game comes with a fixed jackpot of 50x along with the other usual features which include auto play, bonus rounds, free spins, multipliers, scatters and wild symbols. This slot also provides a gambling option.

The high paying symbols of this game are in the form of different types of chilli peppers such as mauve, red, blue and green. The low ranking symbols are the high ranking symbols from deck of cards such as A, K, Q, J, 10 and 9.

The least paying symbols of this game is the “9” with the highest payout of 0.8x and lowest of 0.1x.

Return to Player Percentage
The Return to Player percentage of Extra Chilli video slot currently stands at 96.15% for normal game while 96.82 % for using the Feature Drop 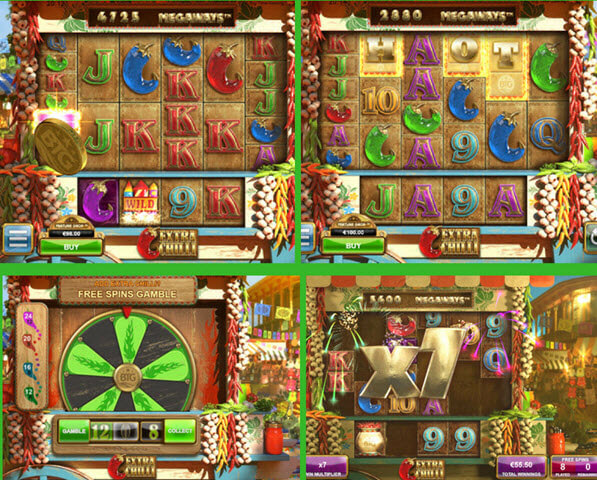