If you have a penchant for the Greek mythology then Divine Fortune slot game by NetEnt is currently one of the best options. The story line of this five reels and twenty bet-ways video slot game revolves around Greek Gods and mythological creatures from earth, sea, underworld, hell and heaven. The slot is designed as a five reels and twenty pay-lines slot game in 5×3 format.

As the context of this game is based on Greek mythology, all the symbols are also based on the same comprising of Greek Gods and mystical creatures. The symbols on the reels do not have any kind of separation between them. The five reels of this game are encased in a metal frame. The background of the reels is in the form of a scene from an ancient Greek temple with two marble statues flanking both sides.

The symbols used in this game are superbly designed animations of different animals with beautiful color combinations. Overall Divine Fortune is a high variance game with multiple bonus features which makes it quite entertaining and worthwhile.

Divine Fortune slot game comes with a fixed jackpot of 600x and progressive jackpot. This slot also provides other usual features which include auto play, scatters, re-spins, bonuses and a wild symbol. This slot does not provide any type of gambling option or multipliers.

Divine Fortune slot game comes with ten bet levels with a choice of twenty to hundred coins per spin. The coin range starts at £0.01 and goes up to £1.00. The minimum wagering requirement for each spin starts from £0.20 and ends at £200.00.

The high paying symbols of this game include symbols depicting the Greek mythology comprising of the Medusa, the Nemean Lion, the Cretan Bull and a phoenix. The other low-ranking symbols are from the deck of cards that include A, K, Q and J. The Medusa symbol provides some of the biggest payouts of this game in the following ways.

The least paying symbols of this game are the Q and J symbols with the highest payout of 60 coins and the lowest of 6 coins. 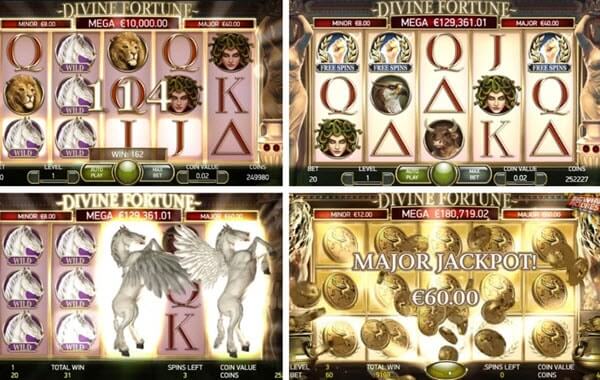 During free spins, any wild symbols landing on the reels converts into Wild on Wild thus automatically expanding to cover the whole reel.