Blood Suckers slot is a video slot game from Net Entertainment with 5 reels and 25 paylines. As usual your winning combinations for this game will be formed from the five spinning reels. This slot game is based on a vampire theme that is accompanied by awesome graphics and superb sound themes in the background.

Some of the features associated with Blood Suckers include Wild symbols, Scatter symbols, a Vampire slaying bonus game and a free spin bonus round. The minimum amount you can bet on  blood suckers slot game is 0.01 per spin while the maximum is 50.00.

Return to Player Percentage
Blood Suckers Slot has a 98% RTP which is one of the top 10 Return to Players percentages according to slotslounge.co.uk. If you are a vampire enthusiast, then Blood suckers is definitely the slot game for you. 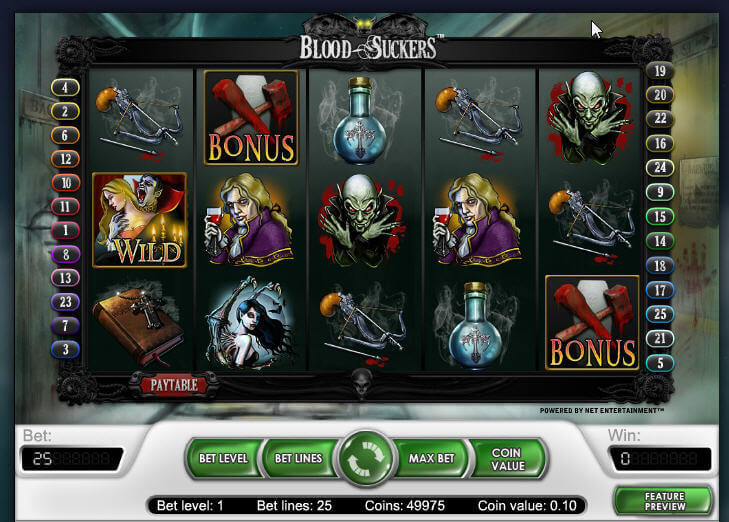 The Free Spin Bonus Round game is activated if more than three Vampire Bride scatter symbols are scattered at any place in the five reels.

When someone has a regular and a scatter win, the payout will reflect both win because it is not a must that the Vampire Bride scatter symbol appears on an active payline for a win. The scatter and payline awards are both independent. The Vampire Slaying Bonus Feature game is triggered if more than 3 Wooden Stake Bonus icons are displayed in successive order in any of the reels.

The Free Spin Bonus Round Game is activated if more than three Vampire Bride scatter symbols are scattered anywhere on the reels. <Here, you get awarded 10 spins which are all free and the winning combinations get tripled. During the Free Spin Bonus all the control buttons including the payline selectors are all disabled. 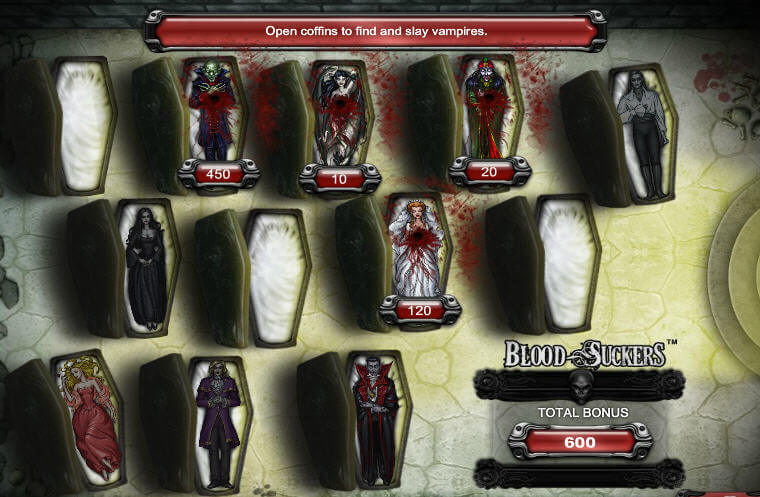 This feature game is activated by three or more Wooden Stake Bonus scatter symbols scattered in any of the reels. It is after you have hunted for the vampires for a very long time that you find yourself in an ancient burial chamber with coffins all around. You need to open the coffins with care so as to slay the vampires.

If you wake them, you now will become the hunted and the game ends. A bonus prize is won for every Vampire that you get to slay. The game will end the time you’ll find an empty coffin and bats fly out of it. Once you complete the Vampire Feature Slaying Bonus game, you return to the regular Blood Suckers game whereby the total win will include your Bonus Prize game wins.