You may think that Pyramid Quest For Immortality video slot is yet another slot game based on Egyptian mythology and there is nothing special about it. At this point you’re certainly wrong. This slot may be another attempt to juice out the already saturated subject, but its unique design and bonus features tells another story. As expected, the storyline of this slot is based on the ancient concept of immortality which was quite prevalent in the ancient Egyptian society. According to their religious beliefs ancient Egyptians believed that immortality can be achieved by spiritual and religious practices.

The reels of this game are designed in a special format with the central reel with highest number of rows thus giving the reels a pyramid like structure. The high-ranking symbols of this game comprises of different symbols and artefacts associated with ancient Egyptian culture. The symbols on the reels do not have any kind of separation between them, they are just hanging there in front of an entrance to temple flanked by statues of Anubis and Horus. The reels are also without any type of encasing separating them from each other. The best thing about this game is that it uses ways-to-win feature rather than common pay-lines thus creating plenty of chances for a player to hit frequent wins.
As per this system, landing five or more of particular symbols in group awards the player with a win. A symbol is considered as a part of a winning combination if it is horizontally landed besides the other required symbols from the left to right side of the reels. Being a medium variance slot game, it is suitable for all types of players. Even though it comes with limited bonus features, but provides frequent wins which make it quite perfect.

Pyramid Quest For Immortality video slot comes with a fixed jackpot of 50x along with the other usual features which include auto play, wild symbols, multipliers and bonus features. This slot does not provide any type of gambling option. Pyramid: Quest For Immortality comes with ten bet levels with a choice of ten to hundred coins per spin. The coin range starts at £0.01 and goes up to £2.00. The minimum wagering requirement for each spin starts from £0.10 and ends at £200.00. The high paying symbols of this game include Tutankhamen, Cleopatra, a bejeweled scarab, Horace and Apep. The other low-ranking symbols are from the deck of cards such as A, K, Q, J and 10. The Cleopatra symbol provides some of the biggest payouts of this game in the following ways.

The Q, J and 10 symbols are the least paying symbol of this game with the highest payout of 5x and the lowest of 1x. 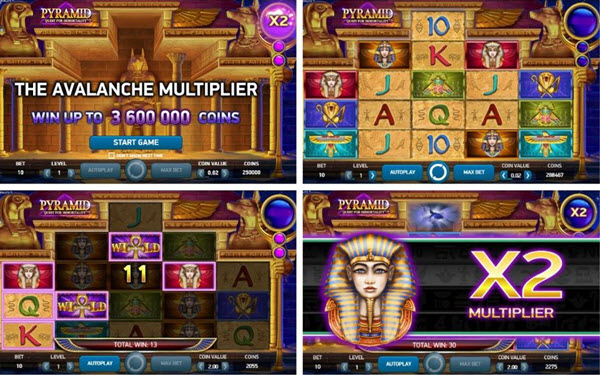 Pyramid Quest For Immortality video slot by NetEnt comes with two bonus features that include the following.