In the Chinese culture dragons are considered as traditional symbols for good luck. These dragons come in different shapes, sizes and symbolize power, strength and auspicious auguring of good times. The importance of this mythical creature can be judged by the fact that even the Emperors of China used dragon as the symbol of their imperial power. The Dragon Island slot game is based on these mythical creatures.

This slot game comes with five reels and 15 paylines. As the name depicts this is a fantasy world genre based game and comprises of all the elements related with the legend of dragons. Being a product of Net Entertainment, Dragon Island comes with state of the art graphics and unique features such as Win Both Ways and Golden Wild symbols.

The reels of this game are set up with a background of a rolling ocean and snow covered mountains on the shore line. The symbols on the reels are seen hanging on vines guarded by two dragon heads on both sides. The soundtrack comprises of dull outdoor noises along with exciting bursts of merry tunes whenever the player hits a win.

Dragon Island slot game comes with a fixed jackpot of 2500x along with the other usual features which include auto play, bonus rounds, scatters, multipliers, free spins and wild symbols. This slot does not provide any kind of gambling options.

The maximum coin limit for Dragon Island is set up at 15 coins for base game and thirty coins for Win Both Ways. The coin range starts at £0.01 and goes up to £0.50. The minimum wagering requirement for each spin starts from £0.10 and ends at £150.00. The high paying symbols of this game include different types of dragons which are a golden dragon, a stone dragon, a green dragon, a water dragon and a cloud dragon. The other low ranking symbols are from the deck of cards such as 10, J, Q, K and A. The golden dragon provides the biggest payout in this game in the following ways

The least paying symbols of this game are J and 10 with the highest payout of 80 coins. 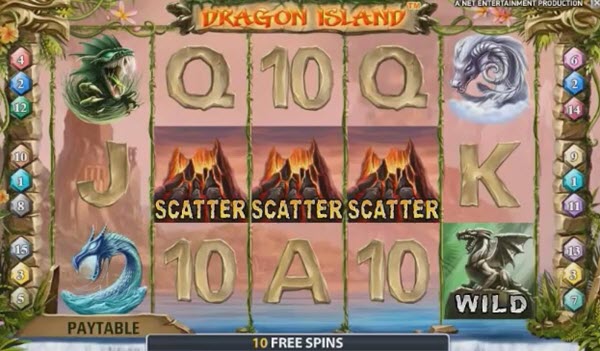 All the scatter wins pay total of bet x multiplier. Wins generated with the participation of scatters during the free spins get triple.

The RTP  for Dragon Island video slot currently stands at 96.70%

Free Spins: Dragon Island comes with Free Spins bonus round. This bonus round gets activated by landing more than three scatter symbols anywhere on the reels. Free spins are awarded in the following way 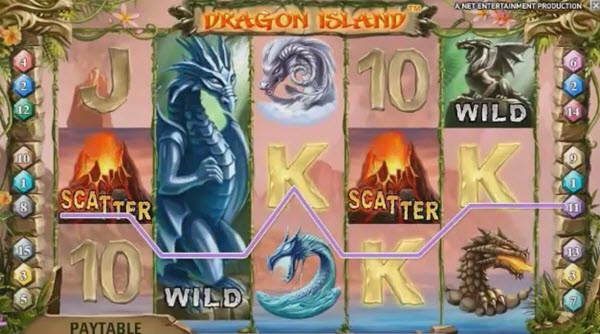