There are many fairy tales which are based on Irish magic and charms. Majority of the symbols indicating good luck such as clover, pot of gold at end of a rainbow and leprechaun originated from the Emerald Island itself. Even the most commonly used phrase in English language “Luck of the Irish” indicates extreme good fortune. Taking cue from the prevalence of Irish charms and magic throughout the world, Betsoft has developed online video slot called Charms & Clovers slot. This slot deals with all the major beliefs related to Irish magic and charms to bring good luck to you.

Charms & Clovers is five reels; extra sixth reel and forty pay-lines online slot. All of the characters depicted in this slot relates to Irish magic. The symbols are in the form of cartoon like animations created using three-dimensional design. Apart from the winnings provided by the pay-lines, this slot also provides three progressive jackpots.

The reels of the Charms & Clovers slot are in a 5×4 format with an extra sixth reel provided separately. Some symbols of this game have their individual frames while the other ones don’t. The reels are also without any kind of separation between them except for the sixth reel which stands alone from the group of the five reels. The background of the reel comprises a scene from Irish forest with crooked oaks and mushrooms growing around them. The main protagonist of this game can be seen standing on the left-hand sides of the reels. The background sound comprises of an Irish classic tune played by an orchestra.

Charms & Clovers slot comes with a fixed jackpot of 50.000x along with three progressive jackpots named Mini, Giant and Colossal. The other usual features include auto play, max bet, wild symbol, scatter symbols, multipliers, bonus rounds and free spins. This slot also provides a gambling option after each win. The minimum coin limit for Charms & Clovers is set up at five coins with five bet levels. The maximum coin limit of this game stands at 200 coins. The coin range starts at £0.01 and goes up to £1.00. The minimum wagering requirement for each spin starts from £0.40 and ends at £200.00.

The high-ranking symbols comprise of a leprechaun, a pot of gold at end of rainbow, 7, clover leaf, pot of gold, a horse shoe, a mug of ale and a triple Bar. The low-ranking symbols are from deck of cards and include A, K, Q and J. The leprechaun symbol provides some of the biggest pay-outs while playing with the highest wager in the following ways.

The Q and J symbols provide the least payouts of this game with maximum of 250x and minimum of 25x. 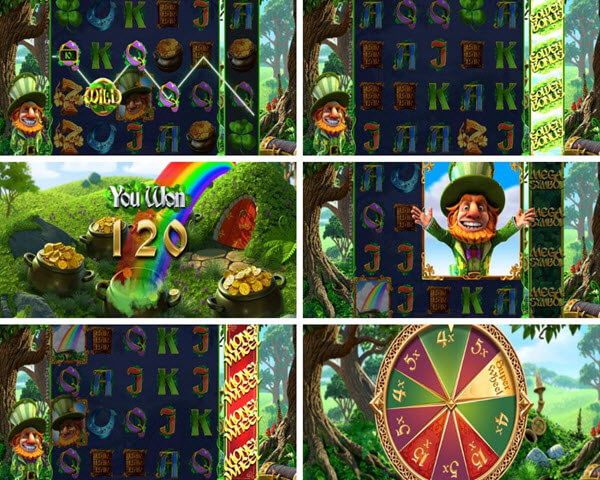 Charms & Clovers by Betsoft comes with five bonus features which include the following.