Every online casino in our days has a collection of online slots games as part of their  online gambling portfolio. Slot games also know as slot machines or fruit machines have changed a lot over the years. But how did we go from the first one arm bandit that was a heavy machine with very basic graphic  to the online slot machines that are fully electronic have  first class graphics, great jackpots and work totally electronically?

The first one arm bandit 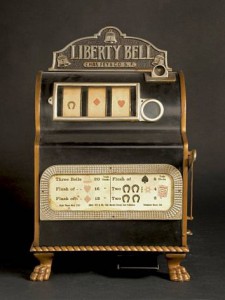 The first one arm bandits were big heavy machines that were noisy and someone needed to spin the wheel manually in order to play them. The name of the first one arm bandit was Liberty Bell Slot Machine and was invented by a German immigrant in San Francisco called Charles Fey back in 1887.

One arm bandit Liberty Bell had 3 wheels and 10 symbols in every wheel. Those symbols where the symbols of a card deck so Hearts, Clubs, Diamonds and Spades  plus of course the symbol of the bell. When the bell symbol was matched in all 3 reels the player was winning the jackpot that back then was 50 cents!

In the early years of the One arm bandit it was simple for the casino punter to calculate the odds. As we mentioned 3 reels with 10 symbols on each reel, that is 10x10x10 =1000 combinations. So the chance for someone to win the One arm bandit jackpot back then was 1 out of 1000. Much better odds than today hey?

After the great success of the first One arm bandit in the US market the gambling community has seen a few more variations of the Liberty Bell Slot Machine coming out. It was then that the first slots machines with fruits like lemon, banana, cherry appeared on the gambling market.

From the One Arm Bandit to the online slot machines

It was the 60’s when the One Arm Bandits start changing and becoming more like the online slot machines that we know today. It was then that the first slots machines with electronic microchips came out in the gaming market. So instead of mechanical slots there were electronic slots that offered to the slot punter a less noisy, more secure and more attractive slot machine. The 70s was the decade that was the borderline for online slot machines.

The first video slots came out in the market and slot gamblers didn’t see them positively to start with for obvious treasons. It was very hard t convince a gambler that by pressing the spin button video slot will bring up on the screen a fair result. It was different for them to to see the reels spinning in front of them rather than just a software bringing up on the screen the results. It didn’t take long though until the slot punters realised how exciting were those new slot machines and the speed, the great graphics and the extra winnings that they could offer to them.

And that’s how we ended up from the first One Arm Bandit with mechanic reels to the online slot machines that we can find today in the online casinos.